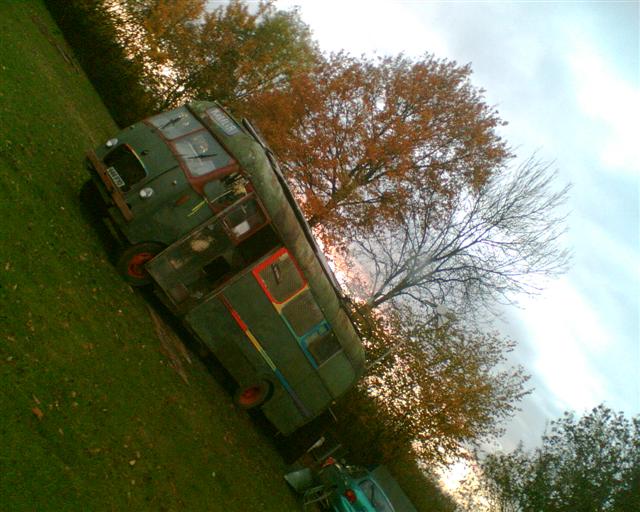 Had a quiet Christmas, as I'd wanted, (turned my phone off for a few hours which was quite daring!)
20:58 2006/12/27 Now there's Tchaikosky's Pathetique on Radio 3, my favourite, and before that was some Schostokovitz, and before that on Radio2 at seven (and every day this week) Bob Dylan's show. I used to hate his singing, but he doesn't, he plays great records and says wise things...
I'm thinking of celebrating my next birthday with a huge party, and lights and bands, don't know where i'll be, check my egroup for more info nearer the time, 365 days to go...
I'll be celebrating my Two Hundredth Birthday!
In the past i've kept my birthday secret, to avoid drunken mishaps, and because (as every fule know) Peter Pan and the lost boys didnt have birthdays - that's the downside of eternal youth, no birthdays - and to wind up the astrologers (at the Big Green last summer I went up to the astrology booking stall and started saying " I dont know exactly when or where I was born but I do know what sort of a person I am, so could you do a reverse astrology on me to work out where and when i was born?"

got my bus towed into yoke farm carpark last wednesday, tried to drive it into the field on the friday but the diff is broken and made terrible noises, 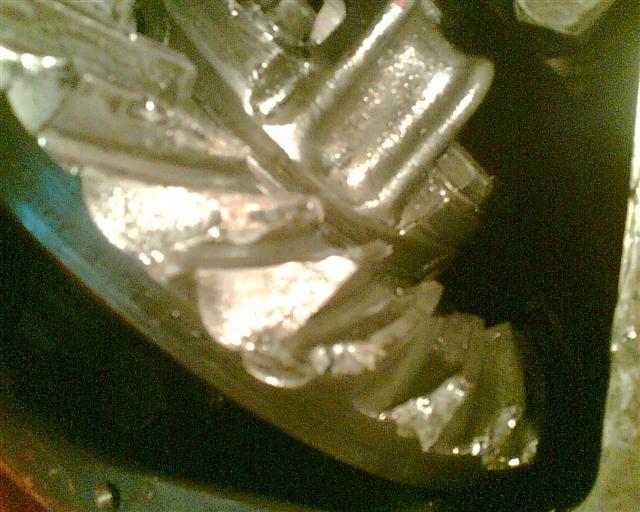 so got towed into the field - thanks to the pullers and pushers...
(a few weeks ago i was under the bus at hatfield courtworking on the new brakepipes when i noticed an oil leak inthe diff, when i took the cover off i fingered out half a tin can full of metal lumps, and noticed the teeth missing photographed here. That's when I began to realise that before the bus'es next MOT it may need a new old back axle, and that thus if i was to get it away from there before winter it'd have to be towed... I regret failing in my dream to work on Jeremy's archives , but I failed in my attempts to co-operate with his widow, Phillipa.
To say nothing of my ex-girlfriends.
) 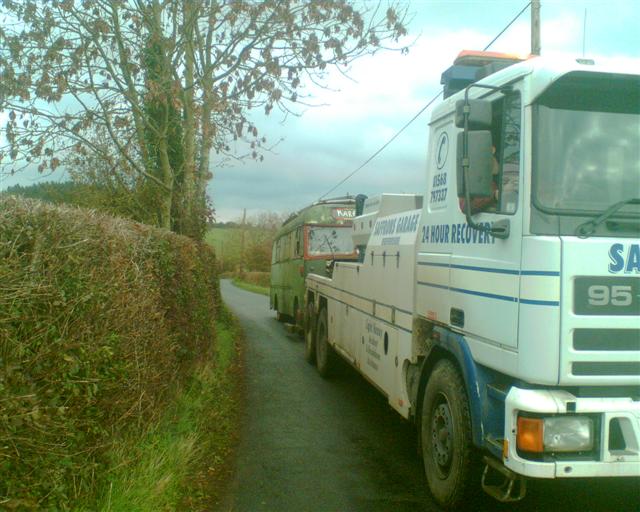 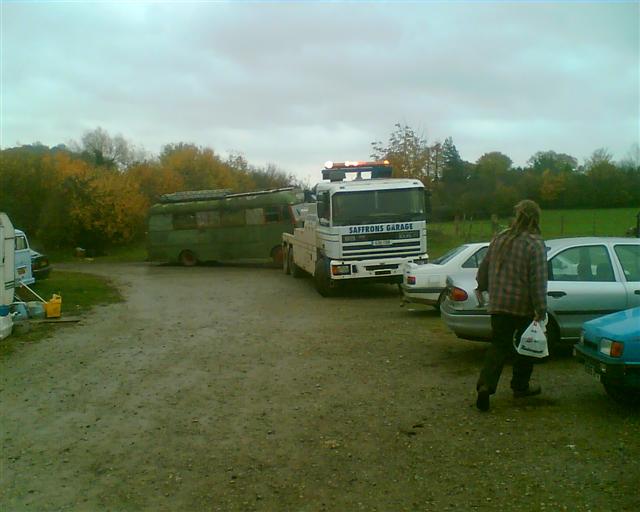 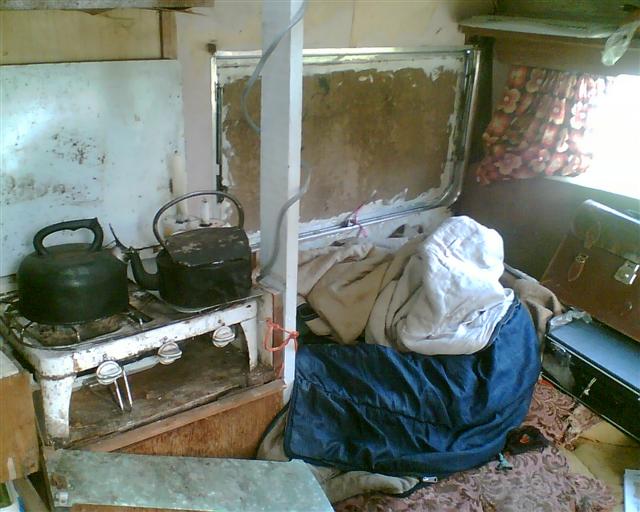 i've been living in this little caravan for months, first at rainbow circle camps in derbyshire and now here at yoke farm near leominster.
23:33 2006/09/27 ~~ My bus is still at Hatfield Court, I went there yesterday afternoon and worked on its roof bolts but I'm living here now, in this field of people, sheep, geese, apples and pears perhaps i'll pop back over the winter and do some more work on Jeremy's archives. It depends on Phillipa, his widow, the legal owner of his archives and copyrights. I'm sorry: I tried again last winter and failed. Perhaps we'll try again this winter.

Monday night, 01:40 2006/09/12 I'd hoped to get away today but theres more to do tidying up the fields that the 3 of us had guessed... almost done though, it was a great camp, but rainbw circle do own too much stuff, pots and pans get donated or left and theres no easy way to refuse it, or to throw it away... 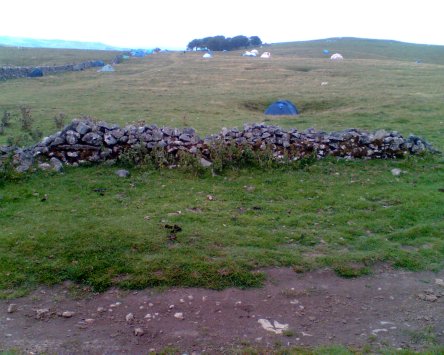 Here's a photo of my tent at the euro-rainbow gathering up on the moors near skipton, i put it in a hole to avoid the gales 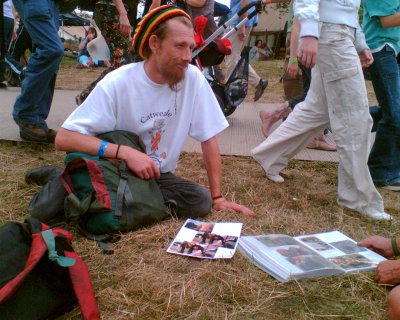 I met Kirk from Wandsworth Eco Village at the Big Green, he showed me his photo album with pics of John Pendragon, I'm adding them to his webpage johnpend.htm

Yesterday I sent an email, as below, cos i'd, sworn that i would, though perhaps i should say that its not very dangerous having the rainbow circle camp in that field over there with an open gate, it a long way for a kid to walk, but its against the way it gone on almost all the sites i've lived on so I felt I had to. But the last thing i want is some new bloody accident and for me to say "I told you so"... that would be awful

hope you all can get here to these loverly fields in derbyshire before the weekend.. 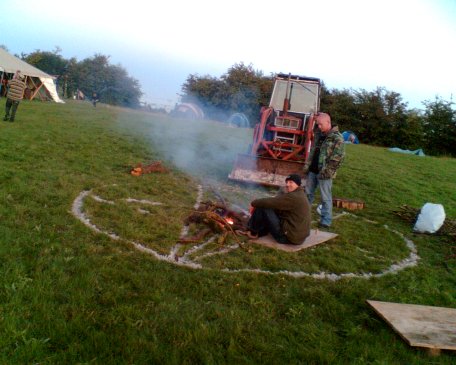 This wonderful amazing Rainbow Circle Celebration Camp near Bradley near Ashbourne is unsafe for kids, in my opinion. (I'm George).

www.rainbowcircle.co.uk
Because the gate to the road is wide open and little kids kids could wander into the road.
At past Rainbow Circle camps at Kniveton, Flaxley, and Teddy Stone's, the gate dome was inside the gate to the road.
However I, george, seem to be almost the only person in this field who thinks its wrong to have the gate to the road open and unwatched.
Sarah used to say: TRUST IN ALLAH, BUT LOCK UP YOUR DONKEYS.
Drusilla, Su, Star, Thorn, Jon, Mshel, Martin and others all say its how it should be.
At a talking circle a few days ago I voiced my concerns and swore that if by 7 p.m I wasnt happy with the gate security I would resign from site crew and send an email publicising these worries on the internet.
So here it is.
I guess in a few days they'll move the gate dome to the road, (the hippies).
Dice George Miles BA (18:47 2006/08/26)
Rainbow Worrier, Convoy Driver, etc etc...
PS I love rainbow Circle
[g] 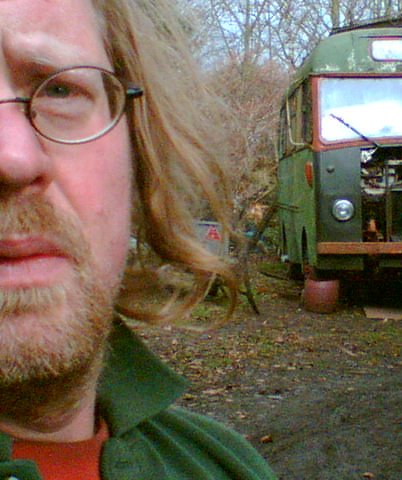 aaaaargh - I lost a weeks' emails cos of a computer crash, (27July2006) Outlook Express had asked to compact folders and stupidly I said YES - it crashed in the middle of this compacting, when I got it working again several folders of emails were empty- aaargh

I'm this year's fashion editor of Festival Eye Magazine: (on sale at WH Smiths)
Fashion Tips from Karelia:
Individuals often look smart and professional wearing black clothes but a roomful or fieldful of such people looks so sad, and reminds us of famine floods and disease, so come on, be brave, colour up.
If you must wear black then black and red is Dennis The Menace or Green and Red for green anarchy... - we wore black in the 80s not as yuppies but in mourning for the societies Thatcher destroyed - the trades unions, the convoy, etc,
And yes, you may say the Labour Leaders are more sophisticated but just as bad as the thatcheroids - but the Labour backbenchers and Libs and Welsh and Scots arent half as bad as the Tory backbench rump, and much power has moved away from democrats to the anonymous london suits (and underage models in slinky black with shaven armpits)...
So at festivals please dont wear selfish black, wear green and shiny rainbow colours, and magenta and pink, and if you must mourn our destruction of this beautiful planet wear white, like at Hindu funerals.
[www.dicegeorge.com]

Summer's here,
23:01 11/06/2006
got a bit sunburnt at Rainbow Circle , got fitter too. Wasted a lot of my time MOTing the f-ing lorry when I could have been playing with kids and music and gettting out the paints.. but wow, wasnt it fun, wish it have been on for longer...
Home to my bus and a bit more madness - spent a few hours trying to get the brakes working, but smashed my car lights so wasted hours fixing them with dexion and HardAsNails glue...
I was going to do a Stonehenge Newsletter , but not sure if I will now...
been too busy to write here, loads of emails to fight off...

My bus now east of Leominster, at Hatfield Court for some months I hope (December 2003) (dont see map ) Whereto next?
Please print and record and get my song
( The Only Time I Lied Was When I Said I Didnt Love You Any More ) to number one for Valentines Day.
Please test my 'internet single' Repetitive Squeaks
and send your feedback (phone 07970-378572)

earlier notes: (from above ) 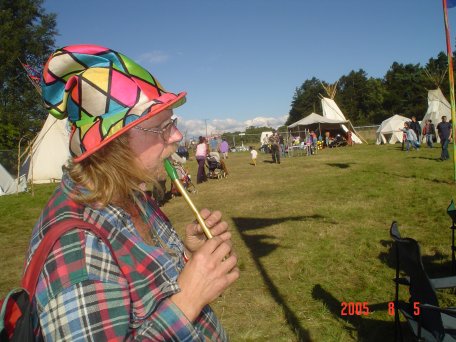 Winters over at last (15:14 31/03/2006) - about a week ago we had snow (which i forgot to photograph), then a few days later I stoked up the rayburn in my bus and woke up very hot, time to go out without long johns... I started my bus with the wheels jacked up, pushed the brake pedal, petrol vapour came out through the air filter hole in the carb - loooked it up in the manuals, there should be a valve somewhere between the brake vacuum resevoir and the engine manifold, so I took it off, took it to Mike the mechanic at Bromyard, and he's going to look inside it, might have seals - I said I dont mind mucking around with the engine - if it blows up then the bus grinds to a halt, but brakes are way too dangerous for amateur mechanics...

As for amateur computers - I've got some new artwork off Viv and spent many hours making new buttons for Rainbow Circle website , found out how to do transparent backgrounds in Gimp , no more Photoshop for me! 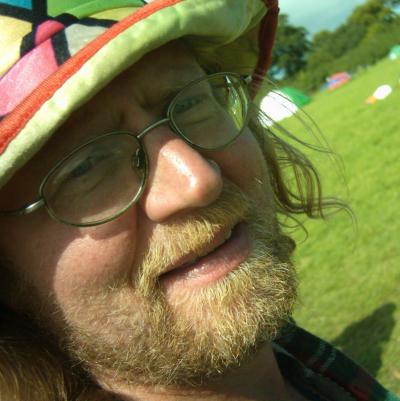 23:08 27/02/2006 (thats [F5] in windows/notepad)
i used to update his page most days but its been almost two months, partly cos busy on other websites and bus brakes and other things but also cos there hasnt been much good news, and i dont like giving out bad news....
it was a two weeks ago i felt i had to resign as archivist of Jeremy Sandford's collection of books and papers and tapes cos it was getting too mad for me and i didnt know what else to do. Someone said on telly they had a 40th anniversary of Cathy Come Home which we should have contributed to, but nothing from here.

Hoppy New yEAR 01:53 07/01/2006 I've just had my first bath, it got almost up to 4 inches of water but by then though the water underneath the tap at my toes was OK the water behind me was getting cold, so I got out without washing my hair. 'Gosh' you may think - 'George's old joke about getting this year's bath in early is about to come up', but , no, it's last year's bath a bit late. It was my last year's new year's resolution to have a bath here at Hatfield Court, but in February I was just getting the hang of the plumbing when a big cold water tank in the water tower sprang a leak, it was a rust hole, it took many many journeys to Bromyard to fix that one, then when i got back into it the hot tank sprung a leak, and it took many months to get it out, and get a replacement off of Ric, then changing all the pipe lengths, and getting experienced at pipe joints (google - thats pipes and joints as in plumbing, not smoking hmhm) then the summer came, but come december i was almost up to 2005 bath time, got the kitchen rayburn lit again, when i get told of a new drip - that ice just before christmas had popped two pipes - I'd turned some off but not drained them - whoops - nobody told me - i'l do it next frost... and the bromyard plumber was shut for a long new years, got the new joints a few days ago, sawed off some old pipe, lit the rayburn thursday, seemed ok, its been on for two days now, so hurrah - last year's bath. I dont know if i could make a bath this years new years resolution and say i've achieved this one early, i think thats cheating, as it was last year's failed resolution, hmm, theres one at the back of my mind, come on george, if i say it here out loud then its sort of official, george, go for it, write that book you've been threatening about john or jeremy or brian or something - call my bluff, i have a few months now... why not? I'll tell you why not - cos if its a disaster that prooves im a failed writer, whereas if i always have it as next years project then i cant get shown up. silly isnt it... so go go go.... could start by updating the webpages....