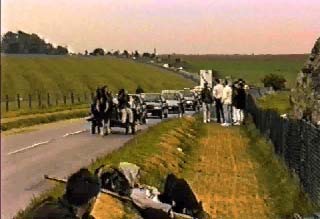 There are now two roads at Stonehenge, the A344 Shrewton Road, and the A303 London-Cornwall trunk road.

The A344 cuts Stonehenge Avenue, it should have been closed years ago, why not close it now? see below .


please email me george@dicenews.com with any more links, text and pics - but not bigger than 100k please!!
Checkout the Stonehenge Campaign homepage for latest news, and ssitemap.htm for other websites, including the stonehengepeace egroup - subscribe to it for more chat.

This road cuts through Stonehenge inches away from the HeleStone, on the other side of the road is the Avenue, two banks which are an integral part of Stonehenge I. They should close this road forthwith, at least the hundred yards from the English Heriticage visitors' centre to the A303 junction) forthwith, cars could triangulate from the A303 roundabout and continue to use EH's car park until their grand redevelopment plans are implemented, years from now. The A303/A344 junction is bloody dangerous, and unnecessary. more road news at Stonehenge 2 ? www.savestonehenge.org.uk Stonehenge archaeology

(from our December 1998 newsletter)

The map overleaf shows the main changes proposed in the current scheme called 'The Master Plan'. The double-dashed line would be a widened A303 put in a 2km length of cut-and-cover (not bored) tunnel. The A344 and the track that crosses it near the Stones (byway 12) would be removed. A new byway would be routed to the west, from where the Stones would not be visible. The road scheme has been approved, but £40m of the £125m cost is yet to be found. Some of this might come from the new visitor centre, which is now back where it was only two schemes ago, on a 20 acre site outside Amesbury. It would be built by a 'private sector developer' - last time it was to be Tussauds, and include "a range of tourism, leisure, recreation and service uses". Visitors would be taken by a park-and-ride route (thick dotted line) to a drop-off point behind Fargo Woods. In theory, access to Stonehenge itself would be free.

There will be a public consultation period from 'early in the New Year' until March on the road widening, which would start "in the next seven years" if there is no opposition. But archaeologists are concerned at the potential loss of "only" five scheduled monuments, including three round barrows and a long barrow.

A steering group of English Heritage, the National Trust etc, chaired by Chris Smith, will press ahead with the Master Plan. A management plan for the whole area will be drawn up by a second steering group chaired by Lady Gass, Vice Lord Lieutenant of Somerset, an EH Commissioner, Tory politician and magistrate. (One of her Norman ancestors was possibly involved in the propoganda campaign in 1278 to convince the British that King Arthur was really dead by claiming Edward 1 had dug up Arthur and Guinivere and reburied them on Glastonbury Tor.)