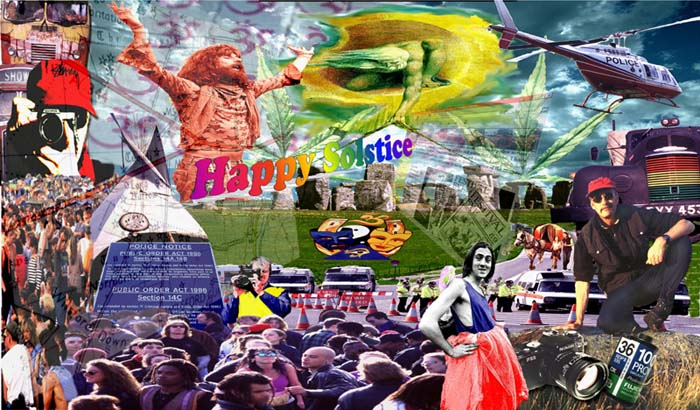 email card from tash - his new website is at http://www.gn.apc.org/tash WINTER SOLSTICE 1998      Newsletter bits For poster of back page or eclipse, SAE + 2 stamps to EFFIN, c/o 87 Debden, Gloucester Rd, London, N17 6LN. The appeal by the 'Stonehenge Two' (arrested for 'trespassory assembly' at the Beanfield 10th anniversary demo) was heard by the Law Lords in October. The judgement, which will decide what everyone can and can't do on the public highway, was expected last month, but perhaps they are rather busy with Pinochet.

The map overleaf shows the main changes proposed in the current scheme called 'The Master Plan'. The double-dashed line would be a widened A303 put in a 2km length of cut-and-cover (not bored) tunnel. The A344 and the track that crosses it near the Stones (byway 12) would be removed. A new byway would be routed to the west, from where the Stones would not be visible. The road scheme has been approved, but £40m of the £125m cost is yet to be found. Some of this might come from the new visitor centre, which is now back where it was only two schemes ago, on a 20 acre site outside Amesbury. It would be built by a 'private sector developer' - last time it was to be Tussauds, and include "a range of tourism, leisure, recreation and service uses". Visitors would be taken by a park-and-ride route (thick dotted line) to a drop-off point behind Fargo Woods. In theory, access to Stonehenge itself would be free.

There will be a public consultation period from 'early in the New Year' until March on the road widening, which would start "in the next seven years" if there is no opposition. But archaeologists are concerned at the potential loss of "only" five scheduled monuments, including three round barrows and a long barrow.

A steering group of English Heritage, the National Trust etc, chaired by Chris Smith, will press ahead with the Master Plan. A management plan for the whole area will be drawn up by a second steering group chaired by Lady Gass, Vice Lord Lieutenant of Somerset, an EH Commissioner, Tory politician and magistrate. (One of her Norman ancestors was possibly involved in the propoganda campaign in 1278 to convince the British that King Arthur was really dead by claiming Edward 1 had dug up Arthur and Guinivere and reburied them on Glastonbury Tor.)

The Campaign has not been involved in the discussions between English Heritage and some groups about the Summer Solstice, but we have received this from one group that has.

As is not widely known, English Heritage has spent the last couple of years in negotiation with various groups and organisations wishing to obtain access to Stonehenge at future summer solstices.

A limited access event of 100 persons at the 1998 summer solstice was deemed by English Heritage and Wiltshire Constabulary to have been successful.

As a result preliminary discussions are under way with the aim of being able to extend access further at the 1999 summer solstice,

As yet no final figure has been set for this event, and it is still unclear whether or not the so-called "exclusion zone" will be applied for.

However both English Heritage and Wiltshire Constabulary have made it clear that they are willing to pursue the eventual dismantling of the exclusion zone, "one step at a time".

Much hard work by purely voluntary groups and individuals has gone into making things successful so far, and those involved in the process sincerely wish to see general access achieved as rapidly as possible.

In order to help realise the next step, it was recently agreed by Mrs. Clews Everard, E.H. Stonehenge Director, that all those individuals wishing to be considered for access at the 1999 and subsequent summer solstices should write to her with their names and addresses so that she can begin to assess realistically what the actual level of demand for access is, and how many people wish to be there if possible,

It was felt by all the participants at the discussions that this represented a much more definite way forward than has been possible up until now.

It was also considered that this represented a much more positive approach to the whole question of access than vague threats of action which could only prove counter-productive to the mutually agreed aim of getting rid of the "exclusion zone" completely in due course.

Those persons who would like to be considered for access should write only, with names, addresses and number of years they have been coming to Stonehenge, to:-

Those who do not wish to write to English Heritage or "apply" for increased limited access spaces but wish to come as members of the general public, should not think that they have been forgotten, as general access negotiations are continuing as rapidly as possible.

Message from will I am x

One of the things the winter solstice is about is death and respecting our ancestors.

The winter solstice represents the end of the yearly cycle but everything doesn't really die, which is why we revere evergreen trees at Xmas. They represent continuity; we decorate them and make them a central feature of the celebrations.

The spring equinox is about birth and life, and is represented by the egg.

Over the years the Christians have mixed up these two dates so we get them around the wrong way: the birth should be at spring and the crucifixion at winter. In the middle ages new year was on the spring equinox.

As the site where the leading British Christians met and decided to change the new year from spring to winter is now mostly fallen in the North Sea and "the walls turn to sand" (Lindisfarne). The spell of the landlord bishops could be at least partly broken. (while bashing the bishop lie back and enjoy).

The early British Christians collaborated with the ancients agreeing that the Sun was the more important and put their own Saturn second, pushing the feminine moon into third place. Thus we have the Saturn-day, Sun-day and Moon-day.

If the E E C is going to shorten the working week to ease unemployment then it shouldn't be the Friday we get off, but the Moon-day thus restoring the feminine balance.

SPELLS FOR A QUIET LIFE :

thanks geocities - got your own free webpages yet?