Stonehenge Exhibition
The Stonehenge Exhibition is nine tritholons of plywood, on which are laminated documents. There are also additional update boards and other objects such as Stonehenge Festival Posters, []george's bus window art , the bicycle, websites , and other modules... http://www.phreak.co.uk/stonehenge/psb/stonex.htm 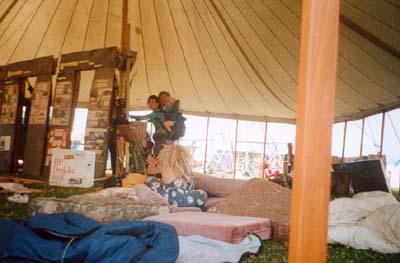 Latest: feb2001 the exhibition boards are safe in storage.

I'm co-ordinating a travelling expedition - ' Stonehenge Belongs to You and me'. It is about contestations and appropriations and about who gets to be heard. It's got all different voices - Free Festivalers, Druids, Locals, 'landowners, archaeologists. English Heritage were going to put in their bit, but they backed off a week before the opening... The exhibition has stuff on media distortion, on legal and police action, and on government legislation.

The exhibition runs from 10-19th June 1993 at Torriano Meeting House, 99 Torriano Avenue, London NW5 (nearest tube Kentish Town). There are three workshops - June 14th is an open forum; June 15th videos will be shown; June 16th will be the legal fall-out with people from Liberty, Charter 88, and Save the Children. Afterwards the exhibition will go to Exeter Museum in September, Bristol Museum in October, and Salisbury Museum in November.

I hope very much that anyone who has staggered through to the end of this long article will come and see the show - there are lots of good photos by Tash and John Warburton!

All the best for this year's Solstice. 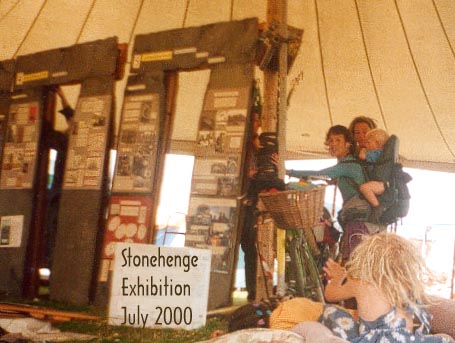